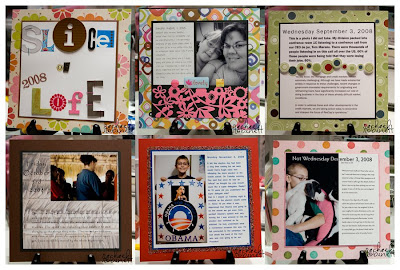 (click on the photo to see it larger)
I have officially finished my 2008 Slice of Life book! If you'll recall at the beginning of 2008 my goal was to take a picture on the 3rd day of the month, every month, and scrapbook that picture and whatever may have been going on that day. I did pretty good, I only had to cheat a couple times but I fessed up to it in my journalling. I tried to keep the layout consistent yet fun. I seemed to keep up better during the first part of the year, working on typically two months at a time. When it got down to the wire in December I had four months to do but I finished them up, including a title page tonight.

I'm very pleased with this project and have every intention of doing it again in 2009. I'm going to try to be less ridged this time (with the date and layout), therefore I will have less guilt when I have/want to cheat! I even picked up a new 8.5x8.5 album for 2009. I have a few empty pages in the 9x9 2008 album that I'm going to fill with other random 2008 events here in the next couple days (i'm on a roll!!!) so watch for those shortly!!
Posted by Unknown at 9:46 PM
Email ThisBlogThis!Share to TwitterShare to FacebookShare to Pinterest
Labels: scrapbooking, slice of life album